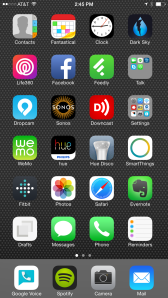 So I thought about it for a minute or so, as I was feverishly refreshing the Apple Store page at 2:01 a.m. that sleepy and frustrating Friday morning.  Should I get the bigger iPhone 6 or the huge iPhone 6+?  I got the big, honking iPhone 6+.

It came down to two things.  And unlike most things, neither of them was money.  The pro- I almost never actually raise my iPhone to my ear.  I have Bluetooth in the car.  I rarely get calls on my iPhone when I’m in the office.  When I’m at home or at the farm, I either use the iPhone’s built-in speaker, Google Hangouts (where I’ve been involuntarily tossed from the no-doubt soon to be shuttered Google Voice), or- and this will become the default- the ability to talk on my iPhone on my Mac via the forthcoming OS X Yosemite.  I rarely handle my iPhone in a traditional phone manner.

The con- I work out a lot.  And during many of those workouts, I listen to podcasts. 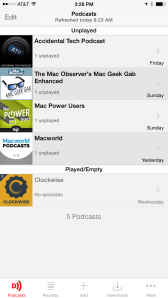 Which means I have to carry this giant phone around in my pocket.  The fact that all of my pants have big pockets was the deciding factor.  So now I’m toting around my gigantic iPhone 6+, with the wonderful iOS 8 and 128 GB of space.

I’ll admit to second thoughts.  But in the end, I’m certain I made the right choice.  Screen size trumps physical size, at least for me.  I think it would, if given a chance, for most people.  But it’s an adjustment.  For sure.

One, it’s slippery and very easy to drop.  The size, thinness and smooth finish conspire to make the iPhone 6+ a drop waiting to happen.  In fact, within (and I’m not kidding) a second of taking my new iPhone out of its box, it sprang from my delighted hands onto (thankfully) the counter in my study.  No harm done, but it could have been much worse.  I haven’t used a case with my iPhone since Around Me was the hot app de jour, but I have been weighing the odds and thinking about getting one.

Two, the screen is large and wonderful.  I didn’t use my prior iPhones for much heavy lifting when I was near a Mac or iPad.  The experience seemed very much like working on a phone.  You can do it, but it’s a little unsatisfying.  Photos or texts, sure.  But anything more than that had me grabbing another device.  Not so much any more.  The iPhone 6+ experience is much more tablet-like.  The resolution is superb and the extra screen space makes a ton of difference.  When I was holding Cassidy’s beloved (because it fits in her pocket) iPhone 4S last night, it seemed tiny.

Three, extensions make a huge difference.  If you’re a geek, you already know what extensions are.  If you aren’t, they allow you to do more stuff on your iPhone.  Apps can interact with one another (e.g., you can edit a photo in the native Photos app with another app, without having to back out and switch apps).  In other words, you can have more creative, seamless workflows.  You can also add widgets to the Today view in the pull-down Notifications window.  This may seem minor, but it is a major productivity boost.  In sum, extensions allow you to have a more computer-like experience on your iPhone and iPad.

Four, the native dictation feature works.  It’s accurate and, best of all, you can see what you’re saying in near real-time.  Previously, you said whatever you wanted typed, and then waited for the iPhone to process it.  As a result, I use voice all the time on my iPhone 6+.  Again, a huge productivity booster.

Five, working with documents will, eventually, be much easier.  iCloud (and iCloud drive) will be more powerful.  Handoff, which lets you start a task on one device and finish it on another, will lead me to use Pages much more than I have in the past.  At this point, other than its mandatory use for work documents, I have little need for Microsoft Word.  I also expect that much of my non-work document flow will migrate away from Google Documents to Pages, etc.  I use the future tense, because much of this requires the forthcoming OS X Yosemite to work.  I’ve been using the Yosemite beta since the day it was released to developers, and I love it.  One caveat: I have found it difficult to get handoff to work.  Hopefully, it will be easier with the release version.

Six, while iOS 8 doesn’t look much different than iOS 7, much of the magic is under the hood.  Developers are going to have a field day adding features.  Some of my most-used apps (Evernote and LastPass, for example) have already been updated to take advantage of things like touch ID and widgets.  I use Drafts (a must-have app for anyone looking for an efficient workflow) many times a day, and am anxiously awaiting its update (would love a beta version, guys).  Over the next few weeks, many, many apps will be updated to take advantage of iOS 8.  The user experience will be vastly improved.

In sum, the new iPhones are big and beautiful.  iOS 8 is powerful and expansive.  The combination of the two with updated and optimized apps will be life-changing.  You’ll think I’m exaggerating until you [hat tip to my editorial board in the comments] experience it for yourself.

4 thoughts on “Six Things About My iPhone 6+”