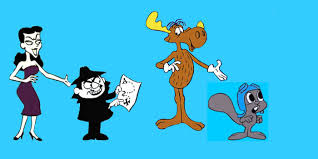 I don’t know when the ritual of Saturday morning cartoons went on life-support, but it was sometime between when I was a kid and now.  It probably had a lot to do with the hundred or so channels kids have today compared to the 3 or 4 we had back in the day.  Videos, both the DVD and on-demand kind, surely played a role.  As did the ability to time-shift via video recorders.

Well, whenever the decline started, it has now ended.  There are no exactly zero cartoons on major television networks on Saturday morning.  Pajiba sums up the melancholy that many of us Bullwinkle and Touche Turtle fans feel:

Saturday morning cartoons were an institution for a couple of generations of American children, our first introductions to stories and characters that we cared about as things made real instead of just the noisy blur of younger entertainment.

I’m sure many of my favorites have been forgotten over the years, but some of the ones I remember seeking out include:

and, of course, one of the few that remained popular with all three of my kids, Scooby Doo.

My kids haven’t thought of Saturday morning as a special time for cartoons in a long time, if ever.  But it’s still a little sad when something that used to be so special is finally and forever gone.