I’ve moved from an Evernote evangelist to an Evernote activist and back to a happy Evernote customer, all thanks to the inexplicable absence and now presence of folders within its desktop app.

Without rehashing the dark and bloody past, and asking what in the hell took so long and whatnot, let’s move straight to the good news.

The just released version 4.1 of everybody’s favorite information storage and retrieval app finally lets us organize notebooks in folders.  They are called Stacks in the app, but that is just semantics.  Folders are here, and I am happy!

See the little white arrow to the left of “Work” up there?  Click on it and the Notebooks in the folder magiciliously  expand. 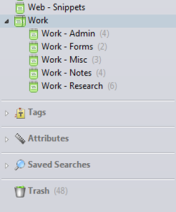 The process is a little kludgy.  When you create a Stack, by right clicking on a Notebook, you don’t get the opportunity to name it right away.  The selected Notebook gets added to a generically named “Notebook Stack.”  You can then select (important step), right click and rename the Stack.  It’s not elegant, but doggone it it’s folders.

First, my app somehow ended up in an Asian language very much indecipherable to me.   So I deleted that installation and reinstalled from scratch.  I got my English back, but the Stacks I created at work did not sync over.  I am apparently not the only person having this problem.

Someone suggested deleting your local Evernote database and resyncing (IMPORTANT NOTE: copy and paste or otherwise preserve your local, non-synced Notebooks somewhere before you do that; I learned that step the hard way when I reformatted my hard drive a few months ago).  I tried that, but it didn’t work.

So I had to recreate my Stacks.  That’s a little bit of a drag, but it doesn’t change the fact that…