Let’s do another installment of my 3 Things series.

Here’s the list so far.  I started with the year 1965, because that’s the first year I can remember 3 things about.

1) During the summer, I attended the Boy Scout World Jamboree in Lillehammer, Norway.  Here’s the newspaper article from my hometown paper. 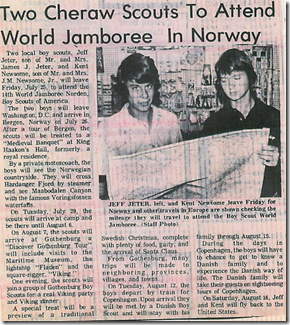 Before that, I lived with a family in Copenhagen, Denmark.  At some point during that visit, I ended up at a topless beach.  It was a great trip all around, but that was probably the highlight, for a 14 year old kid from rural South Carolina.

2) I remember seeing the Saigon airlift on TV, with the helicopter taking off from the U.S. Embassy.  Little did I know that I would one day have a close friend who left Vietnam and came to America at around that time.  She and her family were refugees from North Vietnam, having left for the south with little but the clothes on their backs.  Those of us born in America often forget just how lucky we were.

3) I also remember the Patty Hearst coverage on TV.  I didn’t really understand the point of it all (this was before the internet, etc.), but I had some vague understanding that some rich kid got kidnapped and then went all urban guerilla.  I think I had it just about right.

Assuming you were alive then, what do you remember about 1975?