Assuming the ominous signs are correct, and Blip.fm is about to go from cool music sharing and discovery service to an RIAA-ravaged skeleton of its former self, I need a new music site to take its place.  There aren’t any obvious candidates, so I have been looking far afield in search of a new music hangout.  While I post regular music-related content here at Newsome.Org, it’s not the best place for frequent video posts and short links to good public MP3s.

While it’s not perfect, I think I may have found my new thing.  Tumblr.  Sure, I’ve known about Tumblr for a while, but until this past weekend I hadn’t used it.  I signed up on Saturday and spent a little time creating my Tumblr page.

Registration is easy.  Afterwards, you can choose from a ready-made Theme or write (or hack) your own, via a small but functional custom HTML box. 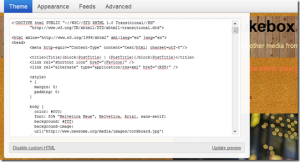 It’s a pretty simple exercise to customize your Tumblr page, and add whatever links and other information you want to display.  After you get your layout the way you want it, it’s time to add some content.  This is where Tumblr really shines.

Via the Tumblr Dashboard, from which you manage your Tumblr page layout and content, there are forms to upload or embed text, photos, quotes, links, chat transcripts, audio and video.  The cornucopia of sharing options reminds me of all the reasons Pownce was a vastly superior content sharing platform compared to the more popular and celebrity-infested, but feature-challenged, Twitter.

The audio and video forms allow you to either upload an audio or video file or to embed a file hosted elsewhere.  Particularly helpful is the ability to embed a YouTube video merely by pasting the URL into the form.  The process is as simple as it could be.

An even better way to add YouTube videos to your Tumblr page is via the Tumblr bookmarklet.  When you share content with the bookmarklet from a YouTube page, the video is automatically embedded in your Tumblr page, along with a descriptive caption.  This is a really cool feature.  If Tumblr could add the ability to do the same thing with audio links, perhaps via a right click, Tumblr could take media sharing to a whole new level.

There’s a very neat iPhone app, a Mac Dashboard Widget (which I haven’t tried) and the ability to add audio posts via your phone, which might be cool to do from a live performance.  You can also add posts via email, or IM.  And there are a ton of third party apps to explore and experiment with.

One of those third party apps adds one very important feature– the ability to play all of your audio posts in a playlist equivalent.

Once you add some content, you can also edit or delete posts via the Dashboard.

At the end of the process, you get a really cool page with mixed media in one handy place.  There is an optional Twitter integration, that will post links to your posts to your Twitter account, and there is the ability to add up to five RSS feeds to your Tumblr page.  One thing I do not like, is the layout of the archive page.  It’s ugly and, well just ugly.  And I don’t see any way to customize it.

Tumblr also lacks to built-in audience and sharing features (props, listeners, re-blips, responses, etc.) of Blip.fm.  This is a big drawback, but if the empty bag holding RIAA is determined to kill the cool services like Blip.fm and all the music sales they promote, it may be that non-centralized locations may be the only way to go if you want to remain relatively unshackled.

While Tumblr has more than enough features to serve as the sharing equivalent of Blip.fm, it does not yet provide the same discovery function.  I’m not sure how to address that problem.  One idea would be to collaborate on and post a shared Tumblr blog roll of similar music pages (the Tumblr directory doesn’t seem to serve a close enough function).  A better idea might be to share a Tumblr page with a group of like-minded music fans.  That’s something I will probably explore if I can find some other folks who like a good mix of alt. country, country rock, classic rock and blues.

In the meantime, check out my Tumblr page for some good music.  And if you’re an artist doing that sort of music, send me an MP3 file or link and I’ll see about adding it to the playlist.