Jane! Get me off this crazy thing!
– George Jetson

Louis Gray has a very good read on the Technorati authority system, which for the two of you who don’t already know, tabulates the number of links from unique blogs (i.e., only one link from each blog counts) over a 180 day period and uses that number as an approximation of your authority within the blogosphere.  This system, while flawed, is presumably an attempt to address what Ken Jennings was talking about yesterday when analyzing the semi-final of the Grand Slam game show he seems to be in the process of winning:

Clearly, it’s hard to come back from any deficit whatsoever in Grand Slam. Players are just checking out of the games too early. Not intentionally, but the mysterious human brain must just be better at algebra and anagrams when it knows it has the confidence of a little time cushion. (I’m reminded of those studies showing that girls do just as well as boys on math problems when they get an empowering lecture first, or that minority students do worse on standardized tests when they even have to write their name or identify their race at the top of the page. Confidence gets those cerebral juices flowing.) This is a problem as a contestant; it’s an even bigger problem if you’re a network exec. What good is your split-second lightning format if one player always ends up winning by a full minute or two?

The game is simple and elegant as it is, but I wonder if it doesn’t need to be tweaked somehow so that early-round wins have less effect on the overall final-round clock.

The idea behind the Technorati system is to keep the blog rankings fresh, so that those of us not at the top of blogger’s hill will feel like we still have a chance.  It’s Technorati’s way of giving us that confidence booster.  The thing is, though, it doesn’t work. 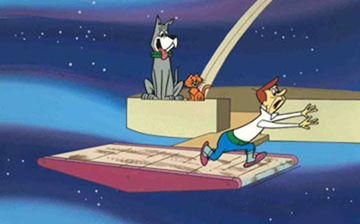 Unless Technorati takes Louis’s advice to heart and resets the link counts every day, which certainly would result in a few more Appalachian State-like upsets, those bloggers with the mindshare and the momentum will always get more links than those of us without it, whether the measurement period is a few days or a month of Sundays.  Lots of folks would have us believe that every 180 days is a new game with the promise of a road victory over the incumbent A-Listers in front of their 109,000 fans.  But just like Ken Jennings is very, very likely to beat all comers in games of knowledge and intelligence, those who currently have the links, and the reputation that, rightly or wrongly, follows all that attention, are going to get more links and claim more “authority” under the Technorati system.  Some will point to the occasional statistical anomaly, but mathematically, it’s true.

Leaving aside the age old question about popularity as a stand-in for authority, what’s to be done about it?

That’s a really hard question, because, generally speaking, those who claim links don’t matter are the ones who either have more than they can handle (to paraphrase Raising Arizona) or who claim to embrace self-imposed isolation as a protest against the whole links as societal affirmation thing.  Other than a general feeling that links do matter, I don’t have a wholly satisfactory answer.

My Swivel Feeds experiment has certainly taught me that there are a lot of really talented and interesting people out there blogging away in relative obscurity while other less talented writers, many of whom post regurgitated versions of the same thing in some cross linking, sleep-inducing dance of the who cares, continue to rack up links and reader counts.  I’ve certainly tried to bring attention to some relatively undiscovered gems, but it’s an inefficient process at best.  The obscure leading the obscure further into obscurity.  Or something like that.

I suppose the best approach is, as always, to take the middle ground.  Links do matter and should be encouraged, but conversations and the friendships that develop around them are also important.  There are 10-15 bloggers, maybe more, who I have over time come to view as friends (not the Facebook kind, but the real kind).  I can tell when a new person has joined that group because I always check their feeds daily, even when I don’t have time to read all my feeds.  If I get secretly irritated at you when you haven’t posted in a day or two, that means you have transcended the blogosphere and become important to me on a personal level.  That is the sort of authority that matters.  Not so much the number of links from unique blogs.  It’s not a perfect answer, but given the variables involved, I think it’s the best one we have.

The blogosphere is imperfect and uneven.  Like life.  There’s only so much we can do to change either one.  But like life, the way to improve the quality of the experience is first and foremost to avoid buying into a system designed for the betterment of a few to the detriment of many.  Drop out of the rat race.  Step off of the Technorati treadmill.

And, in their place, align yourself with good and interesting people.  Not as a clique, but as a community.  An open gathering of those with shared passions and goals.

And sometimes together you can actually make a difference.