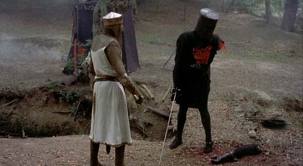 Alex Halperin has a great read today about some of the social networking sites that are at the core of Web 2.0 and beneath the bubble that threatens to grow amid the frenzy that erupts every time someone uses the words “social” and “networking” in the same sentence.

A lot of these social networking and other Web 2.0 sites are well designed and interesting. One or two of them will get enough mindshare to survive and make some money. But somehow, just making some money isn’t good enough any more. We have to huff and puff these applications into some sort of a world-changing, IPO-in-the-making, eBay slaying juggernaut.

Let’s set forth a universally recognized truth from one of the great artistic creations of our time and see how we can apply it to the current situation.

King Arthur: I am your king.

Woman: Well I didn’t vote for you.

King Arthur: The Lady of the Lake, her arm clad in the purest shimmering samite held aloft Excalibur from the bosom of the water, signifying by divine providence that I, Arthur, was to carry Excalibur. THAT is why I am your king.

Dennis: Listen, strange women lyin’ in ponds distributin’ swords is no basis for a system of government. Supreme executive power derives from a mandate from the masses, not from some farcical aquatic ceremony.

Again, a lot of these Web 2.0 applications are cool. I use some of them.

But let’s do a reality check. Web 2.0 and its creations are the playground of a very small subset of the population. Most people don’t know what Web 2.0 is, much less what tagging is. Say “social networking” to 98% of the people you know and they’ll think you’re talking about online personals.

Add the fact that the low barrier to entry for some of these applications results in a crowded space.

Then add the fact that very, very few of these applications have any hope of revenue other than via the crowded and cyclical online advertising game.

And then try to tell me how there is enough money to be made to warrant all the buzz some of these applications are getting?

It’s like a bunch of kids making play dough creations. Every few minutes someone jumps up and says “look what I made!” Everybody oohs and ahs and then resumes working on their own project. The only difference is that at the end of the day, the play dough goes back in the can. Some people have convinced themselves that the Web 2.0 play dough will go in the bank.

The Moral of this Story

The problem is the scale, or at least the desired scale. Not every great idea or technological advance lends itself to the sort of scale and revenue it takes to become a juggernaut.

If I were the developer of one of these applications, I would try to think more like the family owned corner market and be really good at it. Pretending to be the next IBM is not only a waste of time, but it keeps the focus macro when it ought to be micro.