It’s no secret that almost all of my web content consumption is done via Google Reader.  Which, of course, means that like most TV shows I watch, it was doomed.

I have been dreading, expecting and/or denying the reality of this event for a while.  So when I read the official word, I was more resigned than sad.  Google Reader is awesome and, to be frank, Google sort of owes it to us to keep it operational even if it isn’t making money.  But even in the unlikely event Google capitulates to the hue and cry of the masses, if it’s not going to actively develop the app, it’s better to pull the band-aid off quickly.

I looked at the various alternatives, and have decided that Feedly is clearly the best bet.  In fact, in some ways it may actually be better.  Feedly is catering to the displaced Google Reader masses and promises a seamless transition when Google shuts off our beloved service.  The interface is more feature rich.  Sharing is easier (even if sharing to Facebook doesn’t work for me).  I am warming to the Magazine layout (particularly for news-related media), though Titles will remain my preferred view.

With just a little work, Feedly can be almost perfect.  Here’s what needs to be tweaked immediately. 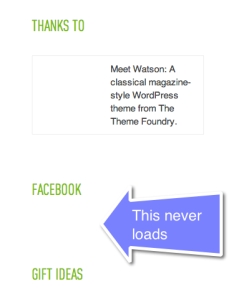 More importantly, the Facebook sharing button at the bottom of each post doesn’t work.  I click on it and nothing happens.  Ever.  Twitter and the other sharing buttons work fine.  This must not be a widespread issue, as I only see a couple of posts about it.

I miss the Readable add-in for Google Reader, which pulls full feeds from a lot of sites, but Feedly’s Preview feature is growing on me.  It’s more or less the same thing – just in a pop-up.

I wish they would tweak the menu in four minor but important ways.

1. Increase the contrast and/or text size in the side menu.  It is really hard to read.  Much harder in the app than in the screen capture below.

2. Auto-sort the categories with unread items to the top.

3. Let me sort feeds within categories alphabetically, or at least manually by dragging them around.

It may sound like I’m complaining here, but that’s not the case.  I really dig Feedly.  It’s about to replace Google Reader as my must used and important app. I just want to see it evolve into the perfect app it can be.