I have been struck this time by the complete lack in the series of any cultural references from the era.  It was mostly set in the late 60s to early 7os.  Other than an occasional reference to seeing an (unnamed) movie, there are virtually no references to music, film or television.  In fact, I can only recall seeing a television in one scene.  A woman’s boarding house room as she was terrorized by John Yaeger.

As a result, I’ve watched closely for any intentional or unintentional cultural references.  I noticed a cardboard animal in David Collins’ room that said “Chicken Little was Right.”  A google search didn’t turn up anything interesting.  There are some interesting posters in David Collins’s room, but until today there was never a close enough shot to see what they were.

There was a scene where I could read this poster.  It says Aug 29 – Sept 3.  I gave google a shot, and much to my surprise and delight it turns out TO BE A CREAM POSTER!!!

Specifically, a Fillmore poster for Cream’s Aug. 29-Sept. 3, 1967 shows with the Electric Flag and the Gary Burton Quartet.

How awesome is that?

A close look shows that they removed the references to the bands and the Fillmore, but it is clearly the same poster.

There’s another Cream poster in David’s room too. 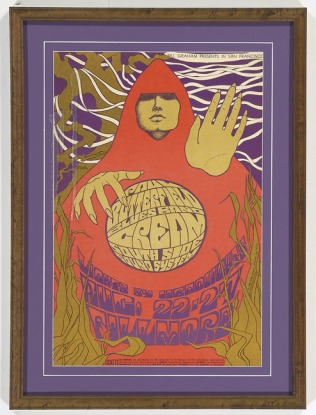 This one from Cream’s  Aug. 22-27, 1967 shows with the Paul Butterfield Blues Band and the South Side Sound System.

2 thoughts on “David Collins Was a Cream Fan!”