People say a lot of stupid stuff on the internet.  After all, that’s what it’s for, right?  The stupidity level rises significantly in election years, when scads of people who don’t really understand what they are saying begin to wildly post and share memes and blurbs spoon fed to them by their preferred plutocrat, who has cleverly conscripted them into some political war that, regardless of outcome, has little or nothing to do with the prospects of the person dutifully regurgitating such nonsense.  In other words, Facebook walls that used to be filled with posts about cats, photos of lunch and whatnot suddenly become a contest to see who can make the most factually challenged and outrageous claims about the rich guy they have been told they hate, while conveniently ignoring all the bad things about the rich guy they have been told they love. 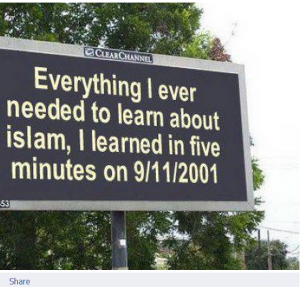 Wow, that photo suddenly made me rethink my entire philosophy.  My moral compass is spinning.  Not.  My moral compass is thinking that the Dalai Lama may be onto something, not because I am losing my religion (I’m holding on for dear life), but because somehow extremists have far too often been permitted to be the face of it. 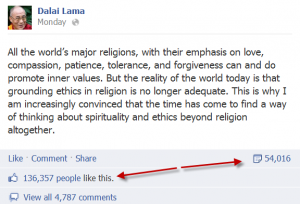 As an aside, if I were the leader of a religion (of any kind), I would be spending most of my time leading cease and desist efforts against the opportunistic zealots who, far too often, claim to speak for religion while simultaneously acting in ways completely inconsistent with it.  Unchecked, this hate-mongering will destroy religion (again, of any kind) from the inside a lot faster that any so-called competing religion will.  Fortunately, young people don’t generally drink the haterade to the same degree as some of their elders.  And more than they need to crap on others who don’t happen to share their beliefs, churches need young people.

Now comes some alleged study happily announcing that Facebook posts can influence election behavior.  Well, it might influence me to vote- solely to cancel out this guy’s vote: 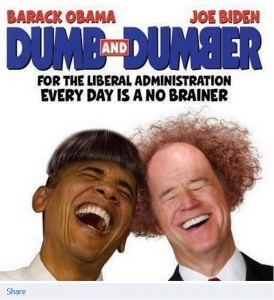 But it is never, ever going to convince me to change my ethics.  If anything, it will only add to my growing belief that the political party system in this country is broken beyond repair.  It’s not about issues any more.  It’s about how much you hate the other group.

I’ve been keeping a rough tally, and I’d estimate that 97% of the Facebook political posts I’ve seen criticize or make fun of the other guy.  Almost none actually discuss why the poster’s rich guy is better than the other one.  It is idiotic, and anyone swayed by this level of discourse will forget who he’s supposed to vote for long before he stumbles his way into a voting booth.

It’s clear to me that these posts are not intended to persuade.  They are merely cyber-tattoos, designed and displayed so people at the same extreme end of the so-called political spectrum can identify each other, congregate in the Comments, pretend they have the first clue what they are talking about, and revel in the camaraderie of extremism.  In order to stand out, to get noticed, you have to be more extreme.  Louder.  Angrier.  Dumber.

The same forces that have ruined our political process and are trying to corrupt organized religion (once again, all of them) are on full display on our social networks.  Maybe this sort of insanity will drive sane people to the middle and to the voting booths.  I hope so.  The problem is that, on Facebook and at the polls, no one cares about the middle.

We’re alone on there and out here.

One thought on “Idiots Gone Partisan: Facebook, Plutocracy and the Rise of the Cyber-Pundit”