I was going to comment on this via Twitter, but I couldn’t make my point in 140 characters, without looking like an extremist.  And that, I am not.  At least not when it comes to content accessibility.

I’m generally on the side of those who argue that most content should be made available, and that filters should occur on the individual level.  If content is filtered on the front end (e.g.,  by the people who control access to content), the choice is taken away from the individual.  Philosophically, that bothers me.  Plus, I have a much broader view of what is interesting than a lot of my friends.  I’m a Simpsons and Southpark fan, whereas many of my fuddy-duddy friends turn their noses up at those shows.

But there are lines, and it looks like Netflix has stumbled over one. 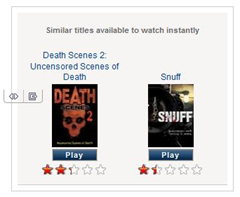 I’ve never seen these movies, and I’m not going to get into any detail about them.  But I am aware of them and what they contain.  Davis describes them:

For those not familiar with the Death Scenes series, it’s a collection of extremely graphic video clips that show the murder and execution of countless individuals.

Look, I’m not sure why anyone would want to watch this stuff.  But that’s not my point.  I view this sort of like smoking and barking dogs.  I don’t care if it happens, as long as it doesn’t affect me.  My issue is that Netflix has these films online and immediately available for any of its users to watch.

There is a nuance here, that needs to be explored.  When I say that I’m on the side of those who argue that most content should be made available and that I think certain content should be harder to access, I am being consistent, and pragmatic.  You generally have to jump though some protective hoops to access the sort of content that is deemed inappropriate for certain viewers.  It doesn’t mean you can’t see it.  It simply means that others don’t have to inadvertently see it.  It’s a reasonable balance.

There is no reason to treat these Death Scenes films any differently.  Surely, Netflix knows that kids are among its most passionate users.  The Death Scenes movies are inaccurately described as documentaries, and the info pages make them seem like horror films.  I can easily see how someone could begin watching these films without knowing what they are getting into.  I’d love to know what the Netflix folks were thinking when they made these films so easily accessible.  I think I know what a lot of their customers are going to think.  They’re going to think about whether Netflix is appropriate for their kids.

Netflix does offer some parental controls.

But there are lots of problems with them.  One, the levels are not sufficient.  The Death Scenes movies are “Not Rated.”  I don’t know that any of the above levels would block them.  Maybe checking “R and below” would block them.  But what about acceptable movies and documentaries that are also not rated?  I don’t want to block a lot of acceptable stuff to avoid a little unacceptable stuff.  Plus, any filter you put in place applies to all viewers.  I’d be fine prohibiting some members of my household from watching R rated movies, but others would rightfully rebel.  I’m not going to change and then re-set filters every time someone wants to watch a movie.

Netflix needs to be more proactive in its programming choices, and more robust in its control options.

One thought on “Why Netflix Needs to Rethink Its Programming Controls”