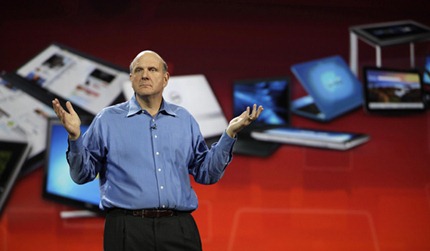 I read with interest Paul Thurrott’s post today on the 2011 Consumer Electronics Show (CES), and Microsoft’s underwhelming presence there.

While I completely agree with Paul’s recent theme regarding Microsoft’s dire need to pick up the pace and raise its game, to keep up with new evolution cycle and the rapid migration to the cloud, I don’t know that I agree with Paul about the prospects for Windows tablets.

This year, dozens of companies will ship Windows 7-based tablets and they will all fail. Instead, consumers will continue buying iPads, and they will buy Android-based tablets (and, possibly, the RIM PlayBook), because those products, unlike Windows tablets, have been created specifically for that market.

While it may very well be in spite of- and not thanks to- Microsoft, I think there is a real chance for Windows-based tablets to succeed.

iPads are great for consuming content.  They are very, very bad for creating content.  Sure, you can read a Word document, but anything more than minor revisions are extremely difficult.  Tracked changes (which are mandatory in corporate America)?  Forget it.  Microsoft keeps hinting that it may one day bring Office to the iPad, and maybe if Microsoft does blow the Windows-based tablet opportunity, it will.  As plan B.  Because I think the fact that it hasn’t yet is very telling: as slow and insular as Microsoft can be, even an old dog knows that Office on a tablet- in any semi-workable form- would be a good selling point.

Consuming is one thing.  But creation is king.

And it’s not just corporate documents.  I knew that I would never be able to manage my flow of Word documents via iPad.  I did think, incorrectly, that I’d be able to blog via one.  To call the WordPress iPad app horrible is a vast understatement.  It’s simply unusable.  Even if they get it fixed, the lack of useful copy and paste and the inability to easily acquire, insert and place photos will always be a frustration.  Live Writer on a tablet?  Sign me up!

The creation hurdle has clearly affected my iPad usage.  I have noticed that the number of days I carry my iPad with me to work has slowly and steadily declined since I bought it.  Now, it’s about one day every two weeks.  That does not sound like a mission-critical device.  Frankly, more than half my iPad usage these days is playing Words With Friends.

Like all tech bloggers, I love new technology.  But my company is still running Windows XP and some ancient version of Office.  I’ve only seen one other iPad in my office.  Ever.

A Windows-based tablet, with software that we already have, has a much bigger chance for Enterprise acceptance than the iPad, Steve Jobs and coolness factors notwithstanding.

Again, I’m a tech blogger.  I have Windows computers, Macs, an iPhone, an iPad, several Apple TVs and one (currently highly content deficient) Google TV.  But the large, large majority of people out there in the real world use Windows-based computers.  It would be much easier for a new customer to choose the known- Windows- over the unknown- IOS.  Better does not always trump convenient.

Microsoft clearly needs to be more nimble, and certainly needs a paradigm shift where application naming and marketing are concerned.  But I think the tablet space could be a big win for Windows.

Shoot, I had a Windows based tablet six years ago.

That little tablet can still create content easier than my iPad.  All it needs is a few tweaks here and there: an option to use the stylus or touch; a leaner version of Windows; wireless broadband; a better display.