Netizens (there’s that word again) everywhere are taking brief Farmville breaks to express outrage over the fact that pimps and hookers are suddenly not allowed to sell their goods and services on Craigslist.  What is the world coming to if we have to get in our cars and drive around seedy areas to buy illegal services that may be exploiting other human beings?  What’s next, are they going to tell us it’s not OK to kill people? 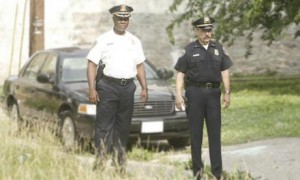 We need a revolution, and we need one now.  Paging Fidel.

Seriously, could this whole brouhaha be any sillier?

Danah Boyd does a good job of presenting the Bunny Colvin plan.  You know, let’s gather up all the criminals and give them a designated place on the internet, where they can ply their illicit trade while we . . . you know, watch them.  That way, the rest of us can go about our business of raving about Twitter and trying to become the mayor of Taco Bell without worrying that some cyber-dwelling prostitute will flash her boobs at us. Well, except for the Facetime thing, but let’s not get distracted from the dogged pursuit of justice here.

Lots of other defenders of our right to party have chimed in as well, including the usually reliable TechDirt.

Let’s face it, this is all about the “c” word.  No, not that one.  Censorship.  And everyone knows that just the mention of that word will guarantee that you win the debate.  Any debate. 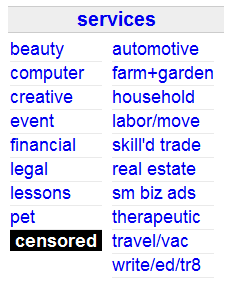 Look, if we’re going to do this, let’s at least do it right.  We shouldn’t require that Craigslist take down the Adult Services (what a hoot of a word) section.  We should make them add a Murder for Hire section.  A Ransom Notes page, where kidnappers can freely express themselves.  Why spend all this money on national security and Iraq and whatnot, when all we have to do is put a Terrorism category on Craigslist?

It worked for Bunny.  By George Bush, it will work for us.  I said that just so I could say bush in a blog post.  Freedom is a wonderful thing.  Well, except for the women who allegedly get traded like rookie cards via Craigslist ads.  It’s probably not all that wonderful for them.

On a semi-serious note (but only semi-so), Craig Newmark has always struck me as a good guy who genuinely cares about people (even if he hasn’t accepted my Facebook friend request).  As such, I sort of hate to see him dragged over the coals about this, particularly since he has long made it clear that he does not have operational responsibility for Craigslist.  Having said that, he shouldn’t be terribly surprised that this issue came up, and it is, after all, his list, at least in name.  I guess I wish this were a golf game instead of a gigantic PR nightmare, so we could give him a mulligan.

All we can hope for now is a resolution that strikes the proper balance.

I just don’t know that Hamsterdam 2.0 is the answer.

2 thoughts on “When Did Craigslist Become the New Hamsterdam?”