First, here’s my Apple story.  I think Macs are way overpriced, and I think the Mac OS is terrible.  Now that I’ve offended those Apple fans that are still in the denial stage, here’s the other side of the story.

I love much of the other stuff Apple makes.  The sadly under-marketed and overlooked Apple TV is a wonderful device for serving audio and video to home theatres.  I have two (well, actually only one- see below).  I think the iPhone is a world-changer as far as phones- and handheld devices in general- are concerned.  My kids love their iPods.

Heck, I happily ordered my iPad the first minute I could do so.  Even though this dude thinks I’m an idiot for doing so.

The point is that, other than Macs (which, by the way, will ultimately be saved when Apple ports the grandchild of the current iPhone OS to its computers), I am a loyal Apple user.  1 iPod mini, 2 iPod Touches, 3 iPhones, a prematurely dead Mac Mini, 2 Apple TVs, and an iPad on the way.

One of the things I used to cite as a reason to love Apple products was the existence of, and great support at, the local Apple Store.  But somewhere between the launch of the company saving iPhone and today, something changed.

Thomas Hawk thinks so too.

A few years ago, my first iPhone stopped charging.  I took it to the Apple Store, without an appointment.  After a short wait, I spoke to someone at the Genius Bar, and got a new one on the spot.  I was happy enough to buy all of the additional gear listed above. 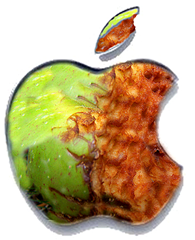 Lately, however, my Apple Store experience has been decidedly less positive.

First, one of our Apple TVs stopped booting, for no apparent reason.  It has all of the symptoms of a bad hard drive.  We took it to the Apple Store, hoping- but not expecting- that Apple would replace the hard drive at little or no charge.  Realistically, all I expected was a good, helpful attitude and a reasonable labor charge to replace the hard drive.  After all, don’t hard drives generally have good warranties?  Surprisingly, the genius at the Genius Bar didn’t seem to want to diagnose the problem.  When we insisted, we left the device to be diagnosed, hoping the attitude was just a blip on the radar.  A few days later we got a call saying the hard drive was bad, and we should just buy a new Apple TV.  For $229.

So based on my Mac Mini and Apple TV experience, are these things disposable?  Seriously, I love Apple products, but based on my experience and the sense I have from talking to others, the failure rate must be enormous.  Which, of course, makes support critical.

And, presumably, expensive for Apple.  Who has to support that stock price.  Hmmm.

Then came the customer happiness-killing blow.  My wife, who destroys electronics  like Sherman destroyed Atlanta, pays, via ATT, for some sort of insurance that promises to replace broken iPhones.  Her ringer silence switch fell off.  She went to the same Apple Store to get it fixed.  This time the genius told her he could tell that the switch fell off due to water-damage, which is not covered by the insurance plan.  While the ATT salesman told her water damage was covered, that’s not the point.  The point is that the phone is not water damaged.  The darn switch fell off, and Apple is refusing to fix it.  Again, the proposed solution: buy another iPhone.

By itself, I could explain away parts of this.  But taken as a whole, and compared to my past experiences, something smells at the Apple Store.

3 thoughts on “Is Something Rotten at the Apple Store?”