Here’s the rundown from a fun weekend.

We spent most of the weekend in Austin with our friends the Fenrichs and the Donovans.  We all had a grand time, and the food was excellent. 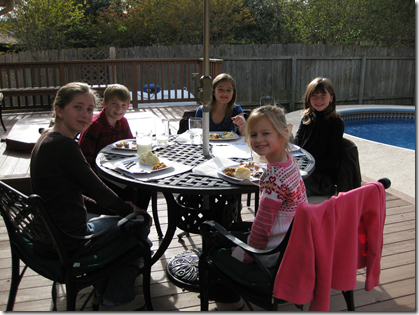 The big kids got to eat their Thanksgiving meal outside.

We had a huge meal on Thursday, followed by lots of napping on the couch and football on the TV.

Cassidy and Remy spent much of their time in trees.

On Friday, Arnie and I shot sporting clays at the Capital City Trap & Skeet Club.  It’s a nice facility with a good mix of stations, and very nice and helpful staff.  They reciprocate with the Greater Houston Gun Club, so GHCC members get member rates there.  I didn’t shoot all that well, but the weather was perfect and we had a good time.  Afterwards, we met the rest of our families and the Donovans for dinner at El Arroyo, Raina’s favorite Austin restaurant.

I had to run a half marathon worth of miles last night, just to begin the process of recovering from all the good food I ate over the weekend.

This morning I was back out at GHGC, taking a shooting lesson from Bobby Fowler, Jr.  I like the heck out of Bobby, and he is a fantastic instructor.  He even had me hitting the rabbit shots, which have long been my Achilles’ heel (it turns out I was shooting over them, and needed to lower my barrel).  My plan is to take a lesson or so each month from Bobby and see if I can raise my game a level.  He wants me to enter some competitions, and I probably will.  In preparation for that, I joined the National Sporting Clays Association.

Raina and the kids went to Galveston this morning with her parents.  After shooting, I had a sushi lunch at Osaka.  Now its off to do some chores.