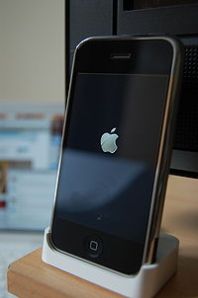 One of the other reasons I waited so long to get an iPhone is the fact that it cannot, yet, serve as a tethered wireless broadband modem for my laptop.  For an extra $15 a month, my recent Blackberries could link up via Bluetooth with my laptop or Samsung UMPC and serve as a broadband modem.  This was handy in airports and in hotels that offered no or ridiculously expensive internet access.  In fact, as long as my phone was in the room or car, my other devices would link up automatically and have instant reasonably fast access.  For two weeks after Hurricane Ike, I ran my home network off of my Blackberry.  It was slow, but the jump from none to slow is more significant than the one from slow to fast.

The iPhone doesn’t tether, yet.  Apparently, there was a third party app that allowed tethering, but Apple squashed it.  Sure, I could jailbreak my phone and find a way to tether.  But the iPhone is about seamless convenience and constant jailbreaking would be seamful and inconvenient.

But I think it’s OK.

The reality is that there is very little I need to do in airports and on the road generally that I can’t do directly via the iPhone.  Sure, I can’t easily create or materially edit documents, but I don’t do that in airports and in transit anyway.  I do that in my hotel room or between speeches at a conference- in places that almost always have internet access.  Plus, while I haven’t tried it yet, iPhone users can access ATT’s wi-fi hotspots at no additional charge.

And there may be other issues at work here.  I suspect that Apple’s agreement with ATT prohibits tethering.  Both as a way to conserve bandwidth and to force customers to buy ATT’s existing wireless cards or the rumored account add-on that may add the ability to tether- at an additional cost.  Add free tethering without a bigger pipe (or additional money to build one) and the demand on the bandwidth will increase materially, likely lessening the experience for existing- and future- iPhoners.  Keeping the bandwidth-hogging geeks from linking up all their gear to their iPhones is, at least for the moment, the governor that makes the iPhone engine run smoothly.

I’d rather do it this way than end up throttled or charged more for someone’s idea of excessive bandwidth use.  The iPhone has clearly crossed the mainstream into the non-geek population.  Many iPhone users are happy to make calls, text their friends and check the weather every now and then, none of which is bandwidth intensive.  If I can ride along with the herd and do what I need directly via the iPhone, with no limits or additional charges, that’s great.  If it turns out I can’t live without tethering and I have the opportunity to add (and pay for) that feature, that’s good too.