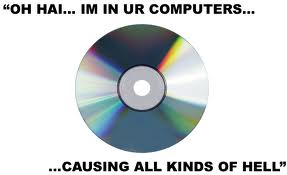 If you want to read more reasons while I will never buy a DRM-infested song or CD, check out David Berlind’s article over at ZDNet.

He mentions a couple of problems that the record label cartel’s beloved DRM forces on the unwilling and perhaps unsuspecting public- one of which is the inability to easily pass your music collection on to someone else when you die. That’s a good point that I’d never thought about before. For the casual music fan who has a couple of hundred songs on an iPod, DRM probably isn’t that big of a deal. Where it is a gigantic problem is when you are a huge music fan with thousands of records comprising a vast music collection that you spent a lifetime and tens of thousands of dollars putting together. In other words, the record label cartel is screwing its best customers the hardest.

Let’s think about the practical effects of this problem. I have over 20,000 songs in my music library, all of which came from LPs, cassettes and mostly CDs that I have bought. All of them have been ripped onto my music server (which after several evolutions is now a dedicated hard drive in my computer and a synchronized back-up drive on my network). The CDs are all stacked in boxes in my garage- hard, tangible assets my kids can dust off and enjoy when they hit 40 and realize that dad’s music isn’t as lame as they thought (this happened to me when I had my “blues epiphany” back in 1994 and realized that most of the old blues songs I thought I hated were awesome songs). While I have some songs from my old LPs and cassettes that would never be recovered if my digital music library got destroyed, most of the songs are on those CDs in those boxes. On the other hand, if I had compiled my music collection via DRM-infested downloads, what exactly would I own? Or would I own anything? Is it truly an asset if you can’t sell it at a garage sale or on eBay or leave it to your children? What’s next, DRM on your mutual funds?

Whatever I would have (and I tend to think that conceptually I wouldn’t own much), I would not be able to legally and easily pass that music on to my kids and even if somehow I could and/or did, the music could stop at any moment if I or they run afoul of the ever-growing list of restrictions that the record label cartel is putting on the downloaded music (some of the fine print relating to DRM indicates that additional restrictions can be added after you buy the song). In sum, you don’t truly control (read truly own) DRM-infested song files and that’s a deal-stopper for me.

The record label cartel uses fact that someone might allow others to acquire unauthorized (read unpaid for) copies of a CD as a carte blanche to sell us crippled and broken goods. If CDs do go away and the only music available is DRM-infested downloads, I simply won’t buy any more music. I’ll just listen to the radio (online and satellite- not over the air, since commercials are almost as unacceptable to me as DRM). Talk about an industry in trouble, traditional music radio is in a world of hurt, but that’s a topic for another day.

David’s article also links to a story about Elliot Spitzer’s probe into the pricing of downloadable music. I suspect the Spitzer probe has to do with the record label cartel’s desire to have variable pricing at iTunes and other online stores- that way if some song becomes a huge hit, they could charge more than a buck for the download. Funny how the ten bad songs on a CD never cost less than a buck. This is another proposed screw-job on the American public, and I hope Spitzer can beat the cartel back under its rock, but as far as I can tell this isn’t really about DRM.

The only way I see to solve the DRM problem is for enough of us to vote with our pocketbooks. That’s what I’m doing.