This is the tenth part in my series of favorite records.

As a confirmed alternative country music fan, I have to look around a bit to find good new music. While I grew up listening to country music, the stuff that passes for mainstream country today does nothing for me. So I read No Depression Magazine, listen to some off the beaten path internet radio stations and XM-12 on XM Radio. It takes work, but it is worth it when I discover a new band. A few years ago I came across a band called The Coming Grass and their self-titled debut record. It remains one of my favorite alternative country records. 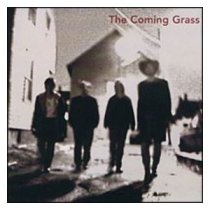 The Boston Herald has described the band this way: The result is a sound that recalls the Uncle Tupelo/Wilco/Son Volt axis, the Bay State’s Blood Oranges and alt-country inspirations the Rolling Stones, but that has a grace, unity and intelligence all its own. You heard it here first: The Coming Grass are coming on.

This record begins with the excellent Take Me Over. Every time this song plays Cassidy comments on it. She doesn’t even recognize much of my music, but somehow this song is on her brain. My favorite song on the record is Carry, which has a great guitar intro and a wistful, country sound supported by great backing vocals.

Put Away Your Expectations is a modern Stones-like mid-tempo number. Most of the cuts on the record are wistful, mid-tempo songs with haunting vocals. While the songs are similar in some ways, the forumla works and it sounds really good.

I noticed that they have another CD out- both are available from the band’s web site. I haven’t heard the second one yet, but if their first record is any indication, I expect it is mighty good.