I have been a regular user of Google Notebook for a long time.  It’s not as pretty or full-featured as Zoho Notebook, but I don’t need a lot of those extra features.  I just need a simple, uncluttered and easy to use place to keep and access notes and other data.  Google Notebook has filled that role well for a long time.  Surprisingly, Google announced today that it is ceasing development on Google Notebook, apparently along with some other apps I have never used.  So from a note taking perspective, I am homeless. 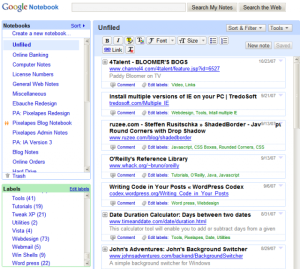 I don’t understand this move.  Google Notebook was a useful and reasonably well designed product.  I have to believe a lot of people used it.  Why couldn’t Google just add a right-side column with AdSense ads to fund development?  I also wonder if this is indicative of a move away from Google’s chase for desktop application dominance.  Google Docs is still under active development, but any office suite (or online substitute) needs a note taking application- at least as an add-on.

Technically, current Google Notebook users will continue to have access to their data and, presumably, the ability to create new notebooks.  But the Google Notebook extension will no longer be available, nor will the hope for new features.  In other words, Google has opened the door, but out of courtesy will wait patiently for everyone the leave the party.

So where does that leave us note taking hobos?  There’s always Evernote, which would be the easy choice if I made all of my notes on the iPhone.  Evernote’s iPhone application is elegant, but its web interface borders on horrible.  I suppose I’ll move my notes to Zoho Notebook, at least for now.  Zoho Notebook is a fine application, but, again, I think it has more horsepower (and clutter) than I need (or want).  Plus, I don’t find an iPhone app for Zoho Notebook.

I need a note taking home, with a simple, but powerful web interface and an elegant iPhone application.

Can anybody spare a link?